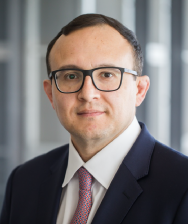 Dr. Eduardo J. Gómez is an Associate Professor and Director of the Institute for Health Policy and Politics at Lehigh University. A political scientist by training, his research focuses on the politics of global health policy, with a focus on emerging middle-income countries. He is the author of three books, the latest being Geopolitics in Health: Confronting Obesity, AIDS, and Tuberculosis in the Emerging BRICS Economies (Johns Hopkins University Press, 2018). Dr. Gómez has published his research in a myriad of peer-reviewed journals, as well as policy journals and major news outlets. His current book project, Junk Food Politics (under contract with Johns Hopkins University Press), critically examines the rise and political influence of soda and ultra-processed food industries in developing nations, with a focus on NCDs among children and the poor. He is also leading several other major research projects focusing on the politics of NCDs, such as type-2 diabetes and obesity, in Mexico, Brazil, and Indonesia. Dr. Gómez is also a Commissioner for the Rockefeller Foundation and Boston University Commission on the Social Determinants of Health. His research has received external funding support from the Rockefeller Foundation, Oxfam, George Soros, and Tinker Foundations.

Prior to his arrival at Lehigh, Dr. Gómez was an Associate Professor (UK Senior Lecturer) at King’s College London, Assistant Professor at Rutgers University, and pre-doctoral visiting scientist at the Harvard School of Public Health. He has also previously worked for the RAND Corporation, the World Bank, and the Inter-American Dialogue. Dr. Gómez is also a veteran of the United States Air Force and is a former Term Member of the Council on Foreign Relations. He received his PhD political science from Brown University, MA in International Relations from the University of Chicago, and BA in Foreign Affairs from the University of Virginia.

Dr. Gómez’s research focuses on the politics of international and domestic government response to a variety of public health challenges, more recently obesity and type-2 diabetes. His current research explores the politics of the commercial determinants of health in several high growth economies.